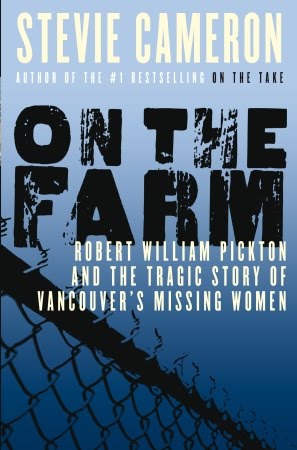 My latest book, The Pickton File, which will be out later this month from Knopf Canada, is a first-person account of working on the Missing Women/Pickton story for five years. It begins with the research plan for a story across the country - a story that required me to move to Vancouver part-time - and find the people who could tell me what happened.

Publication bans are still in force and Willie Pickton's first trial, on six counts of first degree murder, is still under way so it isn't possible - yet - to tell the whole story.

So what I have done here, while I describe the process of investigating this story, is give you a guide to the unfolding events and the players: Willie Pickton and his family, the lawyers on both sides, the victims' families and even the journalists who are covering the unfolding case.

I also take you into the Downtown Eastside, home to the women who disappeared, and tell you what their lives were like. And I take you out to the infamous Pickton farm, to Piggy's Palace where Willie and his brother Dave hosted riotous parties and to the nearby Hells Angels clubhouse.

Most of the photographs you see in this book are ones I have taken over the years; a few came from friends and two new ones - one of Dave Pickton, Willie's younger brother, and one of Piggy's Palace, came from Global Television. Court artist Jane Wolsak provided three illustrations.

And there are several maps to help you understand the geography of this story including a map of the Downtown Eastside, another of Willie Pickton's route from his home in Port Coquitlam to downtown Vancouver, a map of his farm and even a diagram of the interior of his trailer.
Posted by Stevie Cameron at 10:01 PM 1 comment:

The trial begins in the New Westminster courthouse took almost five years for this trial to start...

Although Robert William Pickton was first arrested at his farm in Port Coquitlam, BC, on February 5, 2002 and charged with two counts of first degree murder on February 22, 2002, his trial, on six counts of first degree murder, didn't start until January 22, 2007. In the intervening years two legal steps were completed - a seven-month preliminary hearing in Port Coquitlam, Pickton's home town, under Provincial Court judge David Stone and a year-long voir dire in the Supreme Court in New Westminster that tested legal evidence. When this trial ends, Pickton will face a second trial on a further twenty counts - and no one knows when that will begin.

Led by Crown prosecutor Mike Petrie, the prosecutors in this first trial have said they expect to complete their case by the end of June and then it will be the defence team's turn to present their witnesses and present their evidence. Most people expect the case to wrap up by the end of August.

When the jury delivers its verdict, the plan is to begin preparations for the second trial. But many people believe that a second trial will never happen. Should the jury find Pickton guilty in the first trial, the feeling is that the Crown will stay the twenty charges saving taxpayers the costs of another lengthy court process, one that could include another vire dire.

The pictures you see here (above, right) show the Supreme Court on Begbie Square in New Westminster at the start of the trial in January, 2007. The courthouse was built on the side of a steep hill and you can see the broad steps leading up past it to offices and condos at the top. It's early morning here and the tents used by television and radio crews are still zippered shut, waiting for crews to arrive.

Willie Pickton's lawyer, Peter Ritchie, is shown here (left) talking to the media on July 23, 2003, the last day of Pickton's seven-month-long preliminary hearing. Today Ritchie heads a team of about fourteen lawyers working for Pickton, all paid for by Legal Aid at a rate which was been set by a judge in 2002 and kept a secret ever since.

Crown prosecutor Mike Petrie (left; also shown on July 23, 2003) heads a team of seven lawyers. The Vancouver Sun's Lori Culbert, the paper's lead reporter on the story, is shown behind Petrie on the right.
Posted by Stevie Cameron at 9:21 PM No comments: